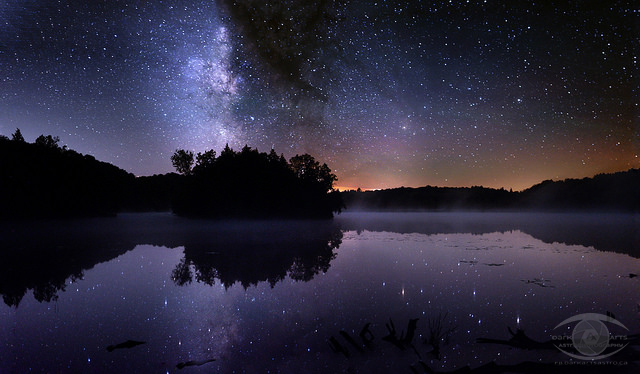 Since I started doing astrophotography almost 3 years ago, it’s been a learning curve. I never stop learning new things. I can see my constant improvement as I move ahead, but despite that, I’m still my own worst critic.

I’ve had a few images that people have raved over. Yet, I look at them and I see flaws, faults, errors, and think of all the ways I could have done it better. And in many cases, I’ve revisited the subjects in question and have improved them significantly. Still not always to where I would want them to be, but improvements nonetheless.  I went over this self-criticism and how it’s helped me improve my work in my Sept 2014 blog entry Striving For Continuous Improvement Instead of Perfection.

While I’ve had some very good results over the past 3 years, I always look at my work critically and think that there’s room for improvement. And rightfully so, because things can almost always be done better. That’s how we improve at our craft.

One of the things I’ve wanted to improve upon was my shooting of the Milky Way. I’ve had some really good results with it in the past, but due to lack of experience shooting it, I’ve never gotten images I was really satisfied with. One of the main things was scenery. The dark site I usually go to – the Lennox and Addington Dark Sky Viewing Area – is a fantastic spot for the pursuit of astronomy. The site has a wonderful large concrete pad for setting up scopes and has the darkest skies that can be found in southern Ontario. It’s pretty much perfect for deep sky imaging and I absolutely love going then. And it’s also great for Milky Way shots due to minimal light pollution. But the landscape when looking south and south-east is pretty bland. Nothing but a few scraggly trees. It makes for great shots of the Milky Way itself, but there’s not much in the foreground.

Now that said, one would wonder why I don’t just find another spot to shoot from! That sounds pretty obvious when you think about it. But I’m not from this area. I don’t really know it very well. Since I moved to this area back in 1993, I’ve lived in the city. I know how to get around the rural areas, but don’t really know them well. I’ve scouted out a couple of alternate locations I can take shots from, but have yet to actually visit them at night with my gear.

That changed last weekend. I went out for a night time photo session with my friend Adam from Adam C Photography. I’ve known Adam for roughly 8 years now as we used to play in a band together. Adam is an amazing photographer, particularly when it comes to landscape and storm photography. He’s also done some great work on Milky Way shots. His real talent for his Milky Way images come from his uncanny ability to find areas with great landscapes to include in the foreground of his images. They just make the Milky Way SOOO much nicer!
So last weekend, we headed out together on a clear, moonless night to one of his known spots. We drove out to this desolate dirt road in Godfrey, Ontario and pulled over to the side of the road and set up our gear on the shore of a lake. From this spot, we had a great 180º view of the east -> south -> western sky with a very scenic landscape in the background.
And the results? Magical! While the sky is relatively dark, there’s still some light pollution in the south from Kingston. Due to our location on the north shore of Lake Ontario, that’s pretty much unavoidable.  But the landscape itself is what made the location.
Everything was perfect. It was a clear, moonless night. And the atmosphere was unusually steady for this region. The location was perfect. My gear was ready and in top shape. I recently replaced my wobbly old tripod with a new heavy duty Manfrotto MT055XPRO3 to keep everything steady. I had fresh batteries in my iOptron SkyTracker. My first project of the night was to do a time lapse of the Milky Way using half-speed tracking – something I’d been wanting to do for a long time, but had never had the opportunity.

I got my gear set up, got my exposure set, my intervalometer programmed, and let it do its thing. Of course, Murphy’s Law struck! After about an hour, the temperature had dropped significantly. And being on the shore of a lake with high humidity at ground level, mist started rising from the lake and fogged up my wide angle 13 mm fish eye lens I was using. Normally I use chemical hand warmer packets attached to my lens with elastic bands to prevent dew issues, but I had run out and hadn’t picked up any new ones. So unfortunately, that project got cut a bit short. This is the resulting time lapse. Short, but still gorgeous!

With Plan A shot, I wiped down my lense and proceeded to shoot a couple of other wide angle shots of the Milky Way. Lens fogging was really affecting me badly on this lens since it had been out for a while and had reached ambient temperature. So I only really got 1 good shot with it before I had to switch out. Not ideal, but still quite good!

At this point, I realized I really had no other option than to switch lenses. Adam had been shooting the core of the Milky Way with a nice 35mm f/1.4 lens and was getting amazing shots. He’s got a pretty killer Fuji camera that can get far better results than mine. I can’t push the ISO settings on my Nikon D7000 anywhere near what he can without getting a lot of noise. But I figured I would follow suit and experiment anyway. I popped on my 35mm f/1.8 lens and decided I would try to do some panoramic shots. This being the first time I’ve done Milky Way photography while trying to include a proper foreground landscape, it took a bit of experimenting with ISO settings. I cranked the ISO to 3200 (WAY higher than I’d ever had it) and took 2 shots that I stitched together to make this panorama. The results were actually pretty good! The background is a little noisy, but manageable. I was able to clean it up surprisingly well! But of course, that high of an ISO setting really brought out the light pollution from Kingston to the south.

I experimented with a few few more exposure and ISO settings before settling on my final settings – a 25 second  exposure time at ISO 2500. I readjusted my position somewhat to get a better view of the water and took 4 shots with the intent so stitch them together in a panorama. This time, I hit the jackpot!

I think at this point, the stars lined up just right for me (pun intended). All the conditions were perfect! The water was completely still and looked like a sheet of glass. My position was perfect, and my camera settings were just right. The mist on the lake had cleared up near the shore and was only visible out over the water near the island. I framed up my shot and took 4 images.

The final result can be seen below. It’s not only my best image of the Milky Way to date, but also I think my best image I’ve ever taken. And due to being a multi-frame panorama, the original image clocks in at a whopping 51.3 megapixels (9382 x 5475) meaning this thing can be printed in some crazy large sizes while maintaining resolution. This is actually my first photo that I can say I’d be more than happy to offer prints of. I plan on getting this printed for myself in a 36 x 24 format of some sort – likely canvas. Should anyone else want a print of this image, I can be contacted at darkartsastrophotography@gmail.com and we can discuss a size, medium and price.

So that’s it for the time being. Until next time, clear skies and keep you eyes to the sky.